Wow! Sitting here 8 hours after watching the latest instalment of the Star Wars saga, dad and my minds are whirling with so many thoughts that we hope we can get them down coherently on here

First off, we must disclose that we’re huge Star Wars fan and have been eagerly counting the days until the film arrived. We’ve watched the trailers excitedly and they served to raise our levels of anticipation

So, Disney and JJ Abrams have already got us on their side just by the fact that they bought the rights to Star Wars and are now making the last 3 parts of the 9 part space epic that Georhe Lucas had originally planned, something we thought we would never get to see

However, we also have the highest expectations and standards to go with those levels of anticipation. We’ve been stung once with the crushing disappointment of Phantom Menace and so, there was a level of caution in waiting for the new film but the trailers looked good and promised much

So, first things first. After all the hype and buildup, was it any good? I’m glad to report a resounding yes. With JJ Abrams at the helm, it’s a return to the action style we loved in the original trilogy. It’s pretty breathless at times and the director now has at his disposal the appropriate special effects capability to realise his vision, resulting in some especially stunning flying sequences. Dad confessed he had a lump in his throat when the X wings were flying over the lake to the rescue 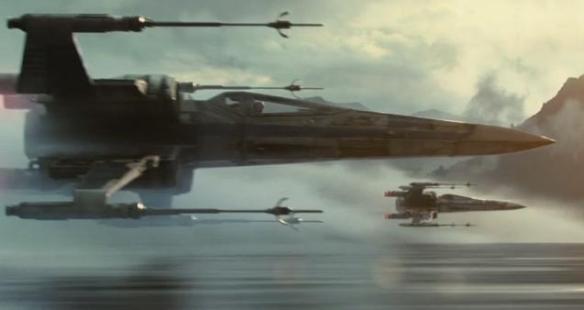 Set 30 years after the Return of the Jedi when we left the Rebel Alliance and Ewoks celebrating the destruction of the second Death Star and the death of the Emperor and Darth Vader, it soon becomes clear that things haven’t gone quite as well as hoped after that victory at Endor and our heroes from the original trilogy are scattered. We are therefore introduced quickly to a new cast of characters. Films like this, which involve a changing of guard are always a little tricky to balance but we think episode 7 just about gets this right 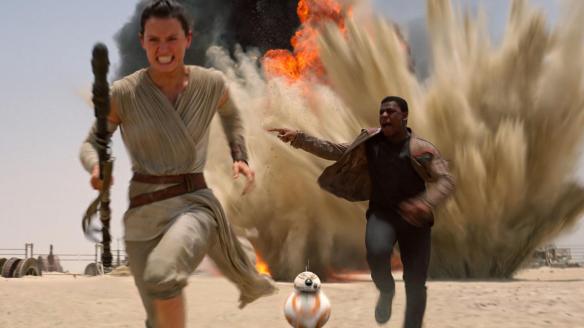 Some of the new characters in The Force Awakens

Some of the most well known and best loved characters in the history of film make a return to our screen and we love the subtle way that JJ Abrams has done it. Some of best pulse-racing moments in the film come when, totally without any warning, the icons we’ve come to love so much are suddenly there, right in front of us again on the big screen. If we weren’t in a cinema with other people around us, I think dad may let out a squeal and applauded! 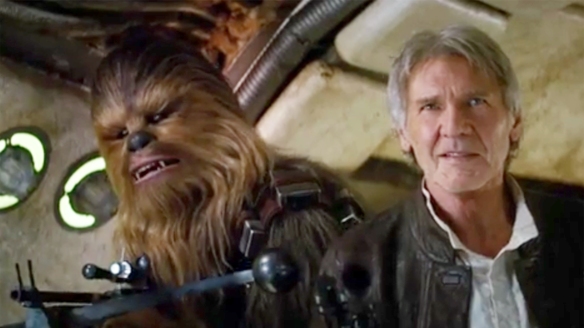 Some of the old characters have aged better than others and none worse than poor Chewbacca who has turned into large, slightly wimpy teddy bear, mainly for comedic moments as the comedy droid duo of R2 D2 and C 3PO have hardly any air time in The Force Awakens

Have Disney turned Chewie into too much of a princess?

If you’ve not seen the film, go and see it. You will not be disappointed. Whether you’re a fan of Star Wars or not, the action will still entertain and maybe even persuade you to go back and watch the old films. So, it’s a big thumbs up from us

If you don’t want any spoilers, please stop reading now. Those who want a more in depth discussion about the film, please carry on and

Ok. So, dad and I had watched the trailers but chose to studiously avoid reading any of the pre-launch speculation about the possible plot lines as we wanted to watch it with fresh eyes and no preconceptions, something you get to do only once. Despite doing this, we easily foresaw virtually the entire plot of The Force Awakens because it was a rehash of  virtually the entire plot of the original trilogy. The opening sequence of events even parallels episode 4: A New Hope exactly 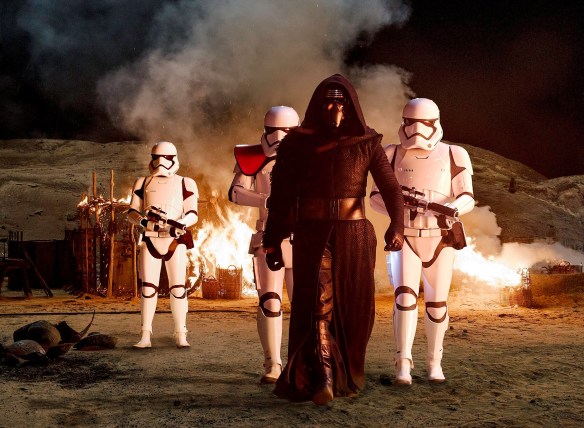 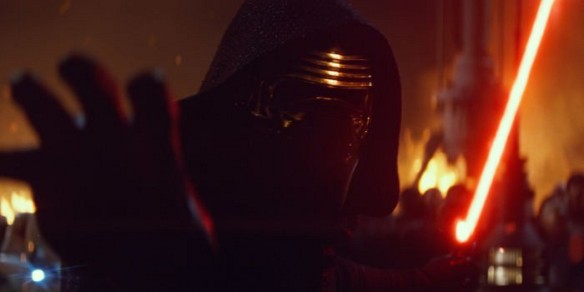 Yes, it’s quite cool that he can stop a laser beam

Also, the baddies in the movie obviously haven’t watched the original trilogy. Or perhaps they thought it would be third time lucky if they built yet another planet-buster with an easily bomb-able part that will destroy the whole structure. There was no tension at the end of the film as it looked and felt just like the end of A New Hope and I’ve seen that many times already

Hmm. Should we put all our troops on what is basically a large fuel tank?

Yes, by all means, you can pay homage to a classic but with the amount of story repeated, it felt a little lazy. Perhaps we were hoping for too much after the promise of the trailers but I felt that there was too little of the mystery and intrigue which seem to have been promised in the trailers. The mystery worked for the original trilogy because the identity and relationship of Darth Vader was revealed slowly over the 3 films. Here, we get to see Kylo Ren’s face straightaway and we learn that he’s Han and Leia’s son early on. Yes, there are still 2 more films to go in the trilogy and we may yet get the promised depth of story. For now, we can only live in hope that they will deliver on that front and answer the question inherently contained in the film’s subtitle – where has the Force been?

We then come to what I’m sure the filmmakers hoped would be the defining moment in the whole film, the death of Han Solo. When it happened, it wasn’t particularly a shock to me and dad, especially when we remembered that this film got a 12A certificate from the BBFC (A New Hope got a U certificate). The buildup made it rather obvious and the question we asked ourselves afterwards was whether it was critical to the plot line. To be fair to the filmmakers, perhaps we don’t know what’s going on behind the scenes and it was necessary because Harrison Ford had got fed up and was refusing to be in involved in episodes 8 and 9. Perhaps, they felt that fans would continue to identify too strongly with the old characters and the only way to force them to bond with Rey, Finn and Poe was to kill off the old characters. Perhaps, it was felt that Kylo Ren came across as too much of a whiny brat rather than a truly feared master of evil like Darth Vader and they tried to make him evil by making him kill his father. However, to me and dad, it felt a bit gratuitous and just put in for shock value. What Disney and JJ Abrams have to remember is that they don’t own Star Wars; the fans do. So, when they kill off one of the best loved characters ever in the history of sci fi, they had better have a very good reason to do so and to us, we don’t see a good enough reason to approve of Han Solo’s unceremonious and meaningless death

We hope that Rey, Finn and Poe will be fleshed out a lot more in the next film as at the moment, they don’t attract the same sort of loyalty as Luke Skywalker, Princess Leia, Han Solo, Chewbacca, R2 D2 and C 3PO did after the first film. We don’t think that their rather bland names help, especially with 2 of the main characters only having a first name. They have potential but now need to truly take centre stage in the next film and make us want to be them and inhabit their lives like we did with the characters from A New Hope

As for Supreme Leader Snoke (the ultimate baddie in the hologram), our only thought when he appeared was why Lord of the Rings had invaded Star Wars. We don’t need a super-Gollum in Star Wars – yes, Andy Serkis of Gollum fame is behind the Snoke character

As nerdy geeks, the last mention must go to the spaceships. The flying scenes are amazing and we get great close ups of some of our favourite ships like the X wings and Millennium Falcon, which seem to have proper weight on screen unlike some CGI efforts in other sci fi films, which look really fake. However, we have to take issue with Leia’s flying portakabin. Who designed that and why didn’t the entire film crew shout,’NO!!!’ at them?

Don’t get us wrong. We still loved the film but felt it could have been more. I did see dad have a couple of sniffly moments and if that happens in a sci fi film, then it must have the power to touch fans to the core and you can’t ask any more of a film than that

Perhaps the strongest sign that we still haven’t really bonded with the new characters is that right at the end of the film when the credits just started running, dad and I were looking backwards as much as forwards. Yes, it would be nice to know what lies in store for our new heroes and villains in episodes 8 and 9 but we were equally intrigued by what had happened in those 30 years between episodes 6 and 7. Questions like how had Han and Leia pushed Ben away, turning him into Kylo Ren. Why did Luke not sense a disturbance in the Force and come back to help earlier? Why was Luke’s lightsaber in a dusty bar storeroom? Why did the First Order stop using clones as stormtroopers? Did the Ewoks stop eating humans after the battle of Endor? Was R2 D2 only in low power mode/a sulk because BB 8 had displaced him as cutest droid in the series? We’d pay to see episodes 6.1, 6.2, etc

Mirror mirror in the sand, who’s the cutest droid in the land?

So, how to sum up The Force Awakens? We think the heart of the film is about the choices we make in life. Finn decides that he can’t slaughter innocent people as a stormtrooper and gets out. Kylo Ren decides to go over to the dark side. Choices have effects and repercussions

We have to now wait 2 years for episode 8 but the good news is that Disney will be releasing a Star Wars related film in the years between the official films in the series. We hope that episodes 8 and 9 will deliver more. These are the movies we want and deserve. Make them, we hope Disney and JJ Abrams will