Dad and I usually enter the USA through Newark Liberty International Airport. Virgin Atlantic arrive at terminal B though we’ve also flown out of terminal A with a myriad of domestic airlines

As we usually arrive just after 11pm EST on the late flight out of London Heathrow Airport, dad usually gives up any semblance of dignity and makes an Olympic race-walking speed dash to immigration. It’s worth the indignity as the immigration line can be long and a quick walk can mean a difference of 15-20 minutes 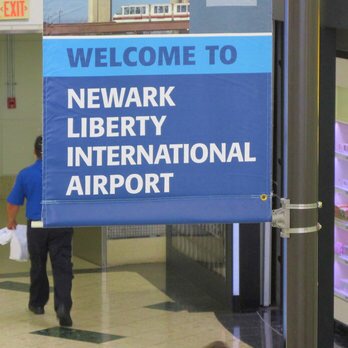 As you’re dashing though, look to the right out of the big glass window in the immigration hall and you can see Manhattan. It’s in the distance but you can make out the whole of Manhattan island. To the right is lower Manhattan with the newly opened Freedom Tower springing out of the redeveloped Ground Zero. Straight ahead is the Empire State Building 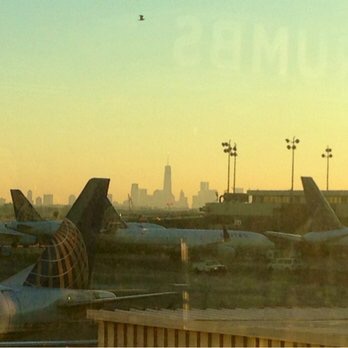 The line is managed well though with immigration personnel feeding passengers into the lines for the different desks. I try to get into a line behind people who look like frequent travellers. The American immigration system now requires getting fingerprints from all 10 fingers of new travellers, which takes time. The line tends to move fairly quickly partly because, I suspect, that we’re one of the last flights of the evening and everyone can go home when the passengers from our flight are processed

Then it’s downstairs to the baggage hall and once again, dad and I are impressed that there are baggage handlers who arrange the bags on the carousel with the bag handles facing outwards to make it easier for passengers go pick them up. Dad usually uses the toilets in the baggage collection hall before he collects his suitcase so he has less stuff to contend with in the toilet

The last checkpoint is to pass through customs and hand in the customs declaration form. Newark Airport is divided into various terminals and areas, all connected by the Airtrain, so look for signs for the Airtrain. Dad and I usually head either for P3 to Hertz or to P4 for the hotel courtesy shuttles. You also ride the Airtrain to get to the Rail Link train station for trains to New York City, a 20-30 minute journey

One last word of advice is a warning that lines for checking into domestic airlines and to get through security can be long, so be generous with your time. The airside food options in terminal A are limited but the breakfast at Phillips Seafood is the best option

For an American airport, not bad