Dad and I had already invested a lot of time in watching the previous instalments of Hunger Games, so we went to see how the whole saga concludes 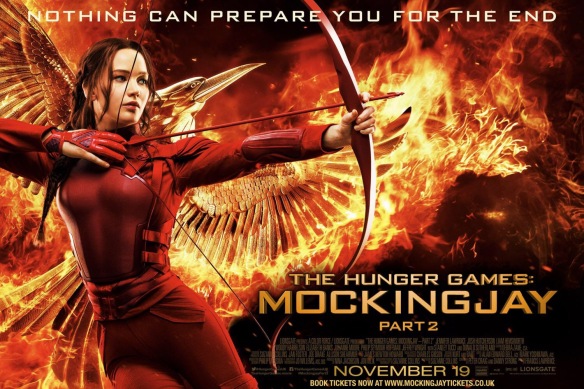 Following in the footsteps and box office success of the Twilight series in bringing teen multi-book series to the big screen, the Hunger Games has carried more mature themes, covering issues such as the inequalities arising from unfettered capitalism, the way absolute power corrupts, the pervasive way media invades our lives and therefore the need for the powerful to control it and in the case of the dystopian world of the books and films, this leading to society ultimately watching children kill each other for entertainment

In a way, it is a film of our times, a warning perhaps of where our society of today may end up if we allow these phenomena, already present in our world today to continue to develop unchecked. Certainly, several lines in Mockingjay part 2 rang strong warning bells in my and dad’s minds when taken in context with today’s newspaper headlines – how the poor’s lives are trapped by the system, how the powerful manipulate the view of their enemies by reducing their humanity and how the statement is made that in war, the ends justifies the means

In a way, that’s the power of this franchise and in particular this last instalment. Having walked out of the cinema last night a little underwhelmed, having reflected on it overnight, we have changed our appreciation of it by coming to the realisation that it was never a movie to entertain in the Panem sense. Let me explain by first showing you the trailer for the film

In case you haven’t watched any of the films, here’s a brief synopsis. The film is set decades in the future from an unsuccessful workers’ revolt, resulting in the gleaming bourgeoise utopian Capitol, capital city of Panem being served by the proletariat districts, where the poor suffer extreme hardship and deprivation in providing raw materials and goods to keep the rich in the style they’re accustomed to. The conditions are harsh and the grip of security absolute but as the ultimate deterrent to any further revolts, there is an annual Hunger Games competition to remind the districts of the control that Capitol has on their lives

Each district is required to provide 2 children as tributes every year, chosen by lottery for the Games, where they will compete with children from the other districts in a battle to the death. The victor lives, the others don’t. Our reluctant heroine, Katniss Everdeen played by the remarkable Jennifer Lawrence is drawn into the Hunger Games when her sister Primrose is chosen to compete and she volunteers to go in her place 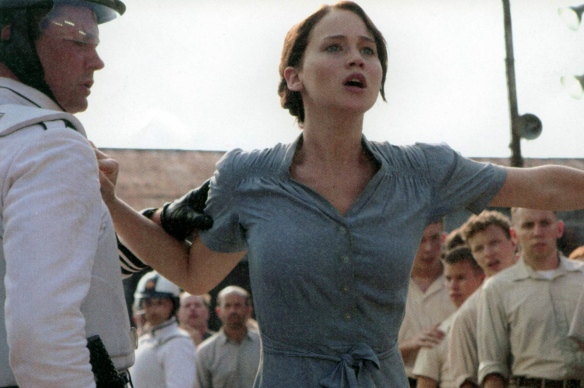 Katniss volunteering as tribute in place of her sister

Perhaps the biggest lesson we can learn from the Games comes from watching Stanley Tucci’s stunning portrayal of the slick Caesar Flickerman hosting the Hunger Games show and how he expertly draws the audience into the whole experience as entertainment, duping them into forgetting that the ultimate horrific thing that happens for their entertainment is children killing other children. Before we of the planet Earth in 2015 throw any stones, can we truly say that the reality shows of today don’t do this to some extent – build people up and break them purely in the name of TV entertainment, perhaps destroying lives in the process. This morning, we find ourselves asking if we, while sitting in the cinema watching the previous Hunger Games films, were suckered into watching the Hunger Games by Caesar Flickerman as entertainment. Perhaps his cunning, manipulative words were aimed at us as much as at his audience in the film. Did we enjoy the ‘action’ in the Hunger Games killing field arena just a little too much as entertainment?

Katniss wins but refuses to kill fellow district 8 contestant Peeta in the final showdown and forces the organisers to change the rules and have 2 winners by threatening to take her own life if she has to kill him. This rebellious, self sacrificial streak brings her to the attention of the psychopathic, autocratic president Snow, who immediately recognises the danger she poses to the status quo, another theme covered in Mockingjay part 2 – the rich and powerful will do anything to keep their comfortable way of life intact

So, he changes the rules and breaks the promise that previous Hunger Games winners will be allowed to return to their districts and live out their lives in peace. He creates a special winner of winners competition where previous champions will have to return and once again fight to the death. There’s a twist at the end of those Games when it emerges that a significant number of those contestants are trying to save Katniss and ultimately help her escape successfully to be the figurehead of a new workers’ revolution led by the self styled President Coin. Despite initial reservations, she begins to see her power to unite the districts in the common battle against Panem and reluctantly becomes the Mockingjay figurehead for the revolution, knowing that she will carry the  burden for the deaths from the revolution with her for the rest of her days 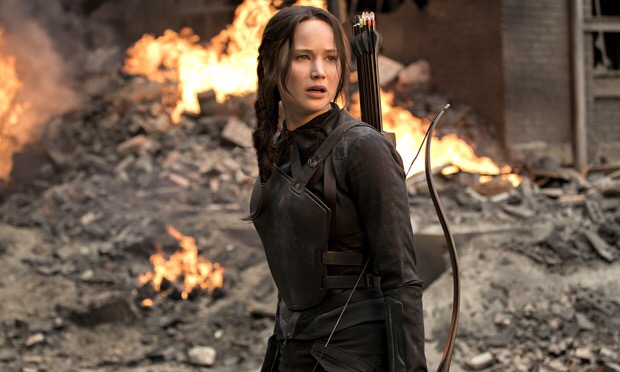 Katniss as the Mockingjay

Hunger Games follows the pattern of recent blockbusters of splitting the last book into 2 parts. In part 1, we see Peeta taken by Panem and brainwashed into becoming a PR tool by speaking out against Katniss. Part 2 opens by showing us that Peeta has been liberated by the rebels but his mind is still brainwashed

That opening should perhaps have alerted us as to the type of film this last instalment would be but we had been conditioned by the previous films and the trailer to expect an action movie similar to the first 2 films. In a way, that expectation hampers it and while exciting, we think the long action sequences covering the rebels’ invasion of Panem to oust President Snow means that the 2 major themes of this film don’t get enough time to develop naturally and the sequences covering them are therefore rushed and the dialogue, which has therefore to be barn door obvious to make the change clear to the audience, sounds clumsy and forced

Katniss fights off a Mutt, proving that cats and dogs never get on

We don’t want to give too much away but just at what you think should be the climactic, triumphant conclusion to the film, it completely changes gear in a most jarring way. The reason we walked out disappointed last night was that the pacing of the film was so uneven. At 2 hours and 15 minutes long, there’s a lot of time to fix that and the editing should have better

There will be times when you wonder when the film will ever end as they keep introducing new angles to the film. There’s a lot to ultimately reflect upon and it’s a shame that it’s all piled in at the end of this last film. While it was the action that first attracted the global audience, it’s the thoughtful questions it leaves us with at the end which is the point and power of this film. While Twilight had better action sequences, it is Hunger Games that will stay with us the longer

So, what of the protagonists in the film? As you’d expect, there are deaths. There are plot twists. The love triangle between Katniss, Peeta and her childhood friend Gale is resolved but again rather abruptly and not altogether convincingly the way it is portrayed on-screen. Our heroine Katniss has a bittersweet end to the film but more on the sweet and reminds us of the personal price you pay for leading a revolution even if you ‘win’ in the end

It is said that if we don’t learn the lessons of history, we are destined to repeat them. In the case of the Hunger Games, dad and I feel that if we don’t heed the lessons of the world of Panem and the districts, we may be in danger of going down that same route and the power of that message is why we now love this film and franchise